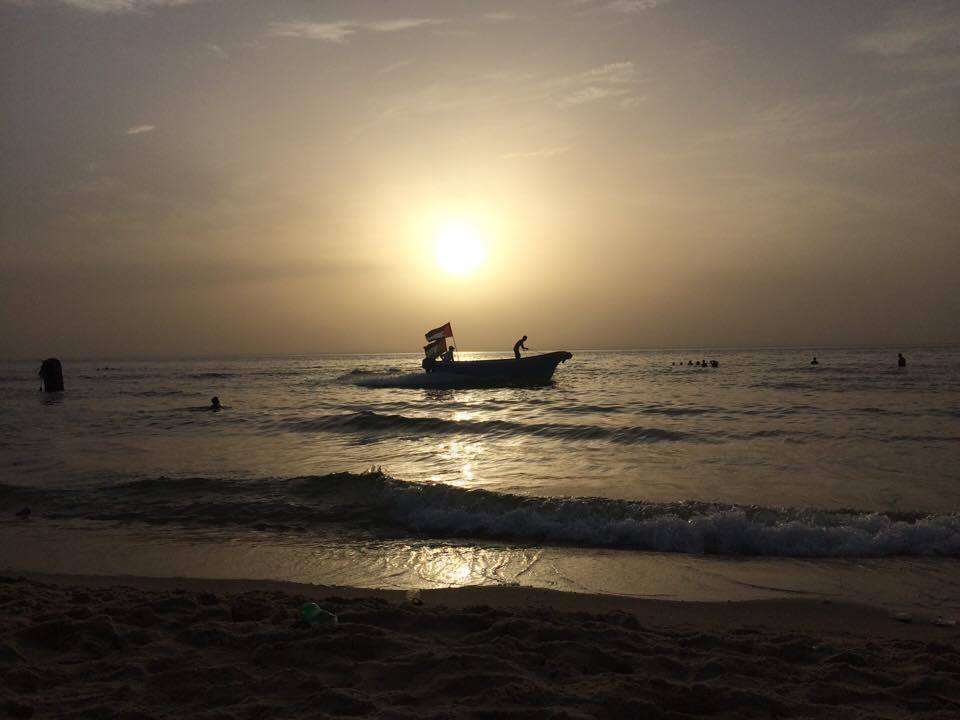 By Mohammad Arafat, in Gaza. This article is from our partners at We Are Not Numbers.

Solidarity with Gaza fishers is proud to introduce an ongoing series featuring the work of these young Palestinian journalists.

The Gaza Strip is home to hundreds of unsung heroes. They are artists resisting the Israeli occupation with their brushes, poets using their words to envision a different future for their people, and teachers arming their students with the knowledge they will need to sustain an economy—if they are ever allowed to do business. They also are fishermen who sail into the Mediterranean Sea every morning, seeking to earn a living despite the ever-present risk of their boats being confiscated and their lives being stolen by Israeli bullets.

After trying to contact him for almost three days, I finally met Zaky Taroosh. He was accompanied by his youngest son, Abdul Latif, who had followed in his father’s footsteps to become a fisherman. Although I first saw them only from a distance, sitting on a scooter puffing black smoke and groaning in resistance near the Bank of Palestine in the Al-Remal neighborhood of Gaza City, I had already begun to sense the pain they have endured.

I hurried to shake their rough hands. Zaky shook my own warmly and gave me a big smile. Abdul Latif was silent due to reasons I could not determine at first.

The two were perspiring heavily in the afternoon heat, so we sat down on a broken bench in Al-Jondi Square, where most of Gaza’s bored, unemployed youths hang out. The three of us sat on that seat under the shadow of a very tall, old tree, whose shade helped us relax. We sipped a cup of unsweetened coffee purchased from a peddler. 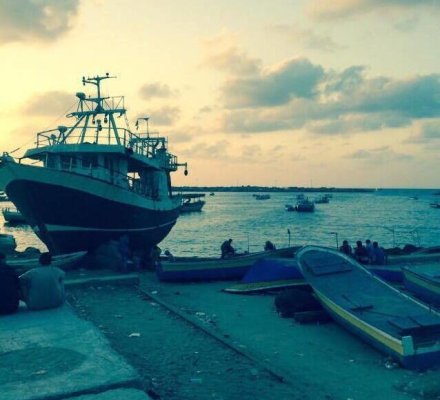 Zaky has eight children, four of whom are sons and fishermen. Sipping a little coffee with his right hand and wiping away his sweat with his left, he started telling Abdul Latif’s story.

“A year ago, Abdul Latif was fishing near Al-Waha, a region near the northern beach of Gaza, and he caught a tremendous number of fish. He was so happy he didn’t realize he was crossing the border line between Israel and Gaza!”

I held my breath, anticipating what would come next.

“As soon as my son saw the Israeli cruiser approaching like a storm, he started to paddle his small boat,” Zaky recounted.

I looked at Abdul Latif, who was sweating as if what his father described was happening in front of him. I turned back to Zaky, who took a box of Royal cigarettes from his torn right pocket, then lit one with an old lighter; I learned later it had been handed down from his father, who was killed in 1967 by the Israeli occupation forces. Zaky was just 3 years old at the time of his father’s death.

“The Israeli navy started pumping water at his small boat, so it capsized—injuring my son [with a gash to his head],” Zaky resumed,.

The Israeli forces arrested him and seized his boat. Abdul Latif was taken to an unknown place in the city now called Ashdod by Israel, where he was treated and interrogated. One day later, he was sent home through the Israeli crossing called Erez.

In Gaza, the government’s internal security department kept him in custody for about a week to investigate what he had endured and what he may have said. It is not unusual for Israeli “security” officers to try to recruit Palestinians as collaborators.

Abdu Latif finally was allowed to return home, but his boat is still in Israel until today.

About a year later, Zaky and his family lost a second fishing boat when another son, Zayed, was fishing with his friend, Mahmoud Bakr.

“Together, they had a good day of fishing; the Israelis had just decided that week to increase the fishing zone (from six miles) to nine,” Zaky explained, taking a last drag on his cigarette before throwing it down and stamping it with his black sandal.

I wanted Abdul Latif to join the conversation, so I asked him when this incident occurred. He was hesitant to talk, but then told me it was April 2016.

Zaky continued: “The Israeli army attacked their boat and arrested Zayed and Mahmoud. Their boats were stolen and they were kept in prison for three months.”

I stared at Zaky in disbelief.

“The Israeli authorities accused the two boys of attacking the army in the sea,” he continued. “An Israeli judge asked for proof, in the form of video footage from the camera installed on the cruiser. The footage was brought in and the judge found nothing that documented the accusations against them, so the two boys were finally released.”

However, Zayed’s boat was never returned.

I urged Zaki to buy a new boat to join his sons’ last remaining vessel. He laughed bitterly, telling me that one small boat costs about 30,000 shekels ($8,500).

“Even if I get a boat from a humanitarian organization, I cannot work anymore,” he said flatly.

I asked him why, since he is still young and his children can help. He remained silent for five seconds, then told me he had been injured himself by the Israeli navy when his boat was attacked, and that bullet fragments are lodged inside his body.

“The fragments hurt so much when the weather gets cool,” he groaned.

I realized then what it means to be a Palestinian fisherman living in the Gaza Strip, spending nights and early mornings being chased by the Israeli navy and afternoons knitting his tattered nets.

I decided to try one last time to persuade Abdul Latif to talk. Soon I learned he has been engaged for a year and a half and cannot marry due to lack of money. The entire family—Zaky and his wife, his unmarried daughter, his four sons and three daughters-in-law—lives together in one apartment that is barely fit for animals. The daily electricity blackouts seem to be an omen for a bleak, unknown future.