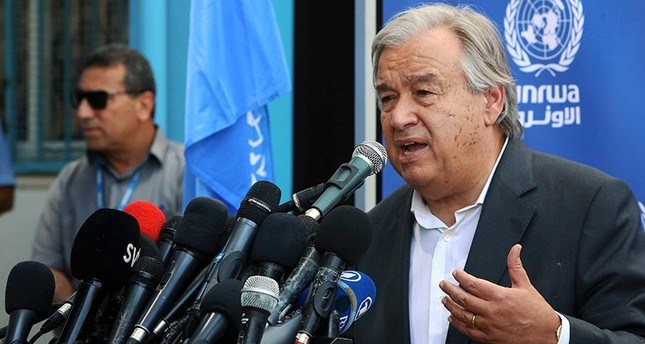 On your recent visit to Gaza, you saw with your own eyes some of the deplorable and inhumane conditions suffered by the Palestinians living in Gaza. You called it “one of the most dramatic humanitarian crises” that you had seen. We hope that, backed by the strength of the United Nations, this experience encourages you to bring maximum pressure on the State of Israel to lift the illegal and inhumane blockade the people of Gaza have been living under for ten years.

We want to remind you that there are many civil society and religious groups around the world who are watching the worsening situation in horror. We are depending on the United Nations, under your leadership, to work at the international level to increase the pressure from all nation states to use every economic and political measure to remind the State of Israel of the standards expected of the civilized nations of the world.

We are also pleased that you noticed specifically that the blockade on Gaza’s southern border with Egypt is upheld by that Arab state in defiance of both international resolutions and a sense of solidarity with a fellow Arab people. Israel is imposing the blockade not only by land, but also by air. They have destroyed Gaza airport, which was financed with international aid (including from Spain). At sea, Israeli forces attack Palestinian fishers from Gaza on a daily basis. They also illegally attack international vessels that challenge the blockade non-violently in the Freedom Flotilla missions that have taken place since 2010.

There are political reasons that make a resolution to the crisis of Gaza imperative at the international level. But even more important are the humanitarian reasons to release an entire people from the appalling situation in which they are currently forced to live.

Your own officers and researchers have concluded that Gaza will be uninhabitable by 2020. Many other reports, including those by the UN, have documented the many threats to the health and even the survival of people in Gaza. The UN has drawn particular attention to the power deficit. Since April 2017 access to electricity is often for four hours or less per day and always unpredictable. Power cuts make sewage treatment impossible leading to pollution of the beaches. Attacks on inshore fishers deprive the people of access to the nutritional value of fish. Your own research has shown up to 57% of Gaza people are ‘food insecure’. Not only is the Gaza economy paralyzed by the blockade, but restrictions on entry of building materials makes it very difficult to reconstruct bombed schools, for example.  The blockade also restricts entry of school supplies and other goods that pose no threat to Israel whatsoever. This entire generation of children and young people in Gaza are growing up without the minimum to develop into educated and well-nourished adults.

The situation is so serious that you have announced an emergency grant of $4 million. But the Palestinians of Gaza do not want to have to take emergency payouts; they want – and need – a cessation of Israeli aggression and real international peace-keeping to prevent further aggression. The so-called “Middle East Quartet” has been a disaster, accomplishing nothing and whitewashing Israeli violation of international law and the breaking of numerous agreements. The State of Israel has also ignored countless UN resolutions aimed at curtailing its activities, as well as continuing the illegal blockade of Gaza and the harassment of its fishing fleets.

In other words, despite its good intentions, the UN has a deplorable record in effectively safeguarding the Palestinians of Gaza and in promoting their security and independence.

We call on you to immediately: