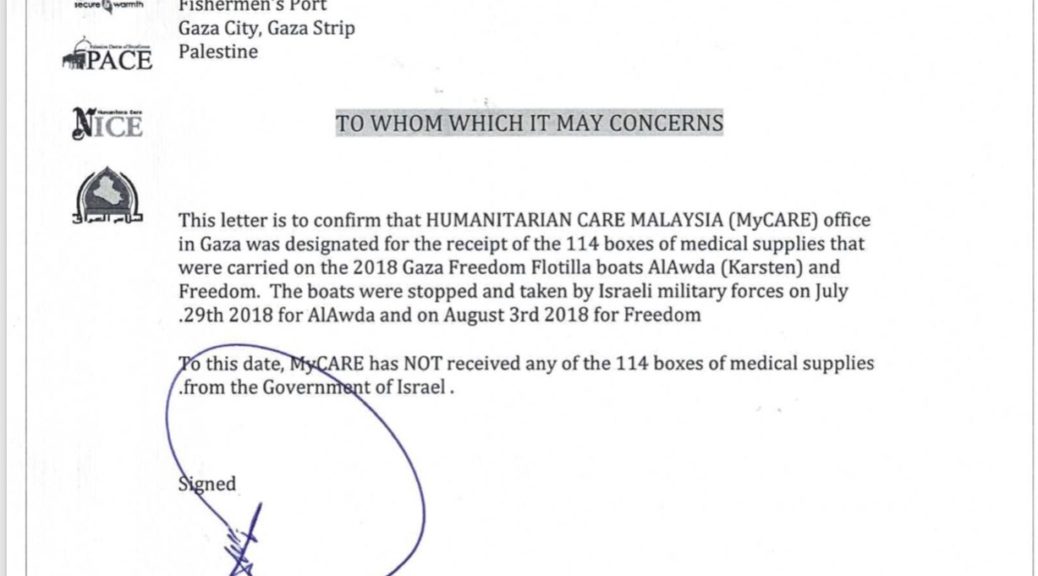 Nearly 15 months after propaganda from Israeli authorities claiming that we countered at the time, the Israeli government has still not released 114 boxes of medical supplies for Gaza that were aboard the two Freedom Flotilla boats which they hijacked in international waters. We received this letter in July from MyCARE, our partner in Gaza, who confirm that to date they still have not received the medical supplies.

In the last couple of months our lawyers have been presenting evidence to the Haifa Maritime Court, including affidavits from Captain Herman Reksten (Al Awda), Captain John Turnbull (Freedom) and Ann Wright (FFC – US Boat to Gaza).

This case is important as we attempt to highlight the effects of the ongoing illegal blockade of Gaza, which has caused a humanitarian crisis, which our boats with their cargo sought to alleviate, in a small way.

29 July 2018 – the Israeli Occupation Forces (IOF) violently attacked our small fishing boat ‘Al Awda’ (The Return) in international waters. Our crew asserted the right to ‘innocent passage’, as we sailed under a Norwegian flag, but the boat was captured and taken to Ashdod. On 3 August 2018, our second boat ‘Freedom’ was also attacked in international waters. 15 months on and the 114 boxes of medical supplies that our boats carried have yet to be received by MyCARE – our partners in Gaza and the boats which we were delivering as a gift to fishers in Gaza have still not been returned or delivered.

Zohar Chamberlain Regev, spokesperson for FFC said: ‘The Israeli government’s ongoing illegal and inhumane blockade of more than two million Palestinian people in Gaza is an outrage. Last year we sailed two small civilian boats all around Western Europe and towards Gaza. Our cargo was medical supplies, love and solidarity which we were delivering to our friends and partners in Gaza. Our boats – one flying the Norwegian flag and one the Swedish flag – were attacked illegally in international waters. We demand to know what happened to the medical supplies which we were carrying and that they will be delivered without further delay to our partners in Gaza.”

11 July 2018 – a group of Israeli citizens presented an urgent embargo request against the same boats to the Jerusalem District Court, claiming that they were the property of Hamas and as such should be sold to pay damages Hamas had previously been ordered to pay.

13 August 2018 – the Israeli state presented a first notice of its intention to confiscate our boats. On 22 August 2018 the official confiscation request was presented to the Haifa Maritime Court based on maritime capture law.

7 October 2018 – hearing at Haifa Maritime Court where it was decided to deal with the request of confiscation for both boats together. Dates were decided for presentation of affidavits and on 11 November 2018 we presented our response to the confiscation request.

25 December 2018 – the Israeli state presented affidavits by Major A from Navy Intelligence [sic] responsible for the preparation for the boats’ arrival, Major Gal Mor from the Maritime Control Unit of the Navy and Anuar Ganaim from COGAT.

29 July 2019 – the Israeli state presented affidavits concerning the medical supplies from Basam Hino of COGAT and Sharon Atshmoz of the Logistics Unit of the Navy base in Ashdod. The affidavits contained discrepancies regarding the exact quantity of medical supplies found on both boats and supposedly delivered to Gaza. Since the supporting documents were not attached to the affidavits, on 1 August 2019 we presented a formal request for access to those documents.

For further information or interviews, please contact any of our media spokespeople.