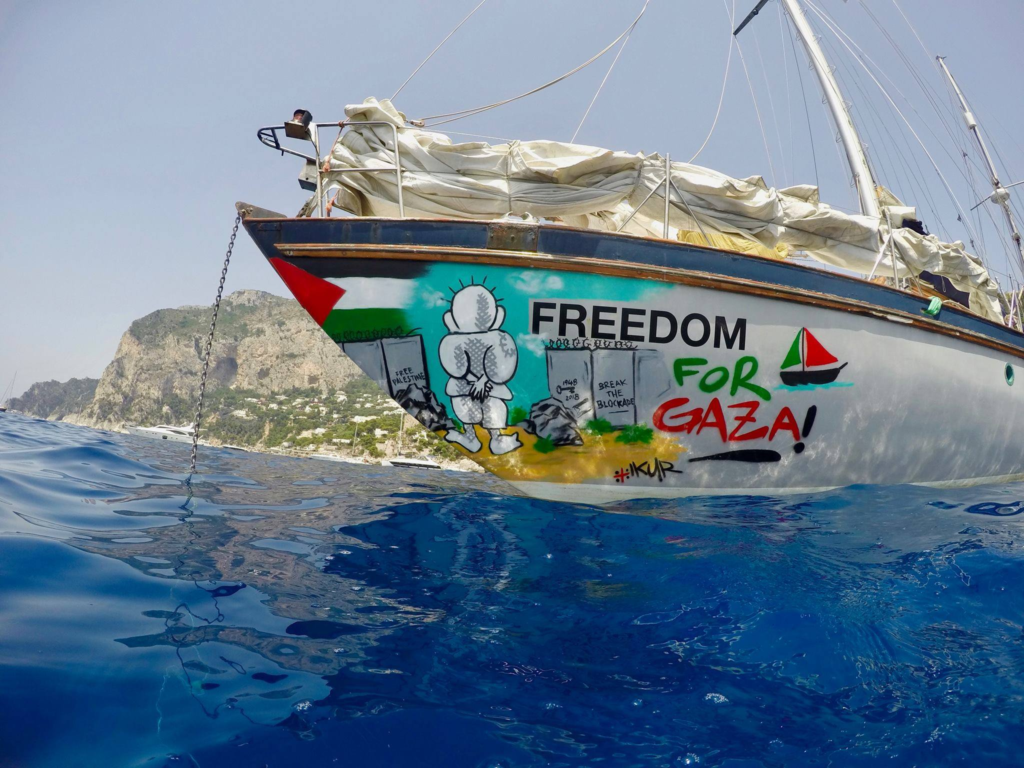 Freedom Flotilla sailors and participants are sometimes asked: Why do you keep sailing toward Gaza only to be captured? Why not give the funds you raise directly to the Palestinians of Gaza as aid? Our rationale for sailing and our experiences in 2018 provide some answers. Our Palestinian partners in Gaza are asking us to challenge the illegal blockade. In May 2018 the Norwegian fishing trawler Al Awda (The Return) and the Swedish sailing ship Freedom sailed from Scandinavia. Over two months, we called on ports in Denmark, Germany, Holland, England, France, Spain, Portugal and Italy spreading the message of freedom for Palestinians. Israel has extended its reach, pressuring governments in Cyprus,Turkey, and Greece to prevent our ships sailing from their ports.

Canadians Karen DeVito and John Turnbull joined the sailing ship Freedom in Denmark and crewed her from Copenhagen to Palermo where John then captained the ship on the final leg toward Gaza. Other Canadians, including Heather Milton-Lightening, Ron Rousseau, Majed Khraishi, Kathy Wazana, and Larry Commodore of the Stó:lo Nation, were on board Al Awda at different points in her voyage, and Canadian journalist Dimitri Lascaris reported for The Real News Network from Flotilla boats and from several ports.

The arrival of the ships at each European port occasioned special events, marches, music, speaking opportunities, as well as visits with municipal and provincial politicians. In some places cities and regions had passed motions to support the Flotilla and recognize Palestine. In Amsterdam, activists organized a small-boat Flotilla through the canals with music, banners and flags. Supporters followed along the canals and bridges handing out hundreds of flyers. Brighton, England gave a rousing welcome on the pier, held an information event in a local park, and a packed house speaking event in the town. Gijón, Spain held a march through the city with about 800 people with music, dancing, singing and a Palestinian flag that required 40 people to parade it through the streets. The City Council of Cádiz, Spain voted the Flotilla "Illustrious Visitor." Two smaller Swedish sailboats crossed Netherland, Belgium and France by river and canal, catching public interest when authorities prevented them from mooring in Paris, and visited a number of other waterside communities.

Energizing local solidarity groups, providing outreach and diplomacy are all aspects of the Flotilla's work. The voyage around Europe is so valuable in these respects. We also discovered that refugees would visit our ships at each port. The mayors of three Italian ports met our ships at the piers and declared refugees welcome to their cities, regardless of their then-Prime Minister's negative attitude. Our crew met with local and provincial politicians, ambassadors– they attended regional parliamentary sessions, municipal meetings and gave presentations to the public as well as tours of the boats. All these activities are part of why we sail.

Palestinians in Gaza are now more than ever connected with the rest of the world by the internet. They know when the Freedom Flotilla is coming; they go to the seashore and wait. We are answering a civil society call when we sail–when we ask our partner organizations in Gaza if they would prefer a donations over a Flotilla, they always respond saying we should to sail and raise international awareness about the blockade. They prefer we expand awareness of the longest running occupation in modern history. They also tell us that our sailing gives Palestinians hope and the knowledge that they are not alone.

The Flotilla movement has launched successful legal challenges to Israel for improper confiscation of our ships. One recent court victory by Ship to Gaza Sweden provided the funds for purchase of the Freedom and two smaller sailboats that travelled through France to the Mediterranean. And so Captain John, when interrogated on the way to an Israeli prison, was pleased to answer this question: "Did a terrorist organization provide your funding?" with a solid "Yes!". Then to the question "Which one?", John replied: "The Israeli government."

The Freedom, aside from its main cargo of hope, also carried some medical aid that Israel is required to deliver. To date our 114 boxes remain in Israel, awaiting delivery to Gaza. While these medical supplies were not a significant quantity, they provide another opportunity for ongoing legal action in Israeli courts against the blockade.

The Flotilla will sail again in 2020, at the request of Palestinians of Gaza. This is the year the UN report declared that Gaza will be unliveable. Right now, most of its drinking water is contaminated. Every child shows symptoms of psychological distress. Each Friday Palestinians stand on their own land near the fence asking for their human rights as Israeli snipers shoot them. In 2018 the IDF has killed 254 people in Gaza, 47 of them children. Thousands have been injured; many amputations have resulted.

There are shortages of medicine in Gaza. Children go to school in shifts. Many are orphaned. Israeli drones fly overhead day and night. Hospitals are overwhelmed, especially on Fridays. Last summer we met young Jamil from Gaza in an Italian port; his mother had applied to Israel for permission to take him there for medical treatment. During the years of waiting he had survived on blood transfusions from his grandfather. He must return once his rare blood condition is treated. We saw the worry in his mother’s eyes. Gaza is hazardous even for a healthy child.

And so the flotilla will sail again in 2020, even more mindful this year of the children of Gaza and the tenth anniversary of the attacks on the Mavi Marmara and other Flotilla vessels in 2010.

One critical way to help this campaign is to contribute financially. There are different ways you can make a donation. Click here to donate. We ask you to consider a monthly donation. We are pleased to accept e-transfers from Canadian bank accounts (Interac) or online using a major credit card or PayPal account. You can also donate by cheque or money order and mailing to Canadian Boat to Gaza, PO Box 1950, London Stn. B, London, Ontario N6A 5J4, CANADA. In other countries, please consider donating through one of our Freedom Flotilla coalition partner campaigns.

Please help us spread the word about our campaigns:

– share our messages with your family, friends and/or work colleagues and encourage them to join our mailing list;
– send an endorsement message from your association, union, congregation or political party;
– organize and attend events to raise funds and awareness for our campaign;
– join a Freedom Flotilla campaign near you and encourage others to do so;
– follow us on the web, Facebook, Twitter (see below) and share our posts widely.