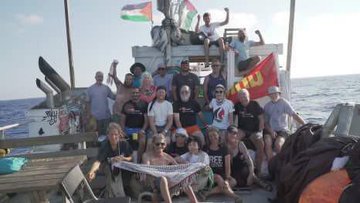 Two people from Al Awda (The Return) have been released, but most of the crew and participants are still in unlawful detention at Givon prison in Israel. We are still gravely concerned for their safety and well-being as we had no contact with most of them as of 14:00 CEST today. We continue to demand that our boat and the medical supplies on board reach their rightful recipients, Palestinian civil society in Gaza.

Although the Israeli Occupation Forces (IOF) claim that the capture of our vessel happened ‘without exceptional incident’, eye-witness Zohar Chamberlain Regev reports that at the time of boarding: “People on board were tasered and hit by masked IOF soldiers. We did not get our passports or belongings before we got off the boat. Do not believe reports of peaceful interception.” We urgently need to know the details of who was injured and how seriously, and what treatment they are receiving, if any. A military attack on a civilian vessel is a violent act and a violation of international law. Taking 22 people from international waters to a country which is not their destination constitutes an act of kidnapping, which is also unlawful under the international Convention of the Law of Sea.

From the time we lost contact around 13:15 local time on Sunday, we know that the IOF blocked all communication signals, including satellite phones. We are very concerned about this violation of journalists’ right to report freely and we remain gravely concerned about their ability to keep their professional equipment and their storage media. As Australian journalist Chris Graham recently observed “Bad things happen when good people stay silent, as history well records. But horrendous things happen when media are prevented from scrutinizing the actions of a state.”

Two of our participants who are Israeli citizens have been charged with attempting to enter Gaza and conspiracy to commit a crime, and were released on bail last night. One of them, boat leader Zohar Chamberlain Regev, reports seeing blood on the deck of the Al Awda as the last participants were being dragged off the ship.

In comparison with the violence routinely directed at Palestinian civilians, including at fishers from Gaza, and the violent capture of Palestinian fishing boats, yesterday’s seizure and kidnapping may not be the most serious of Israeli crimes. What these violents acts have in common is that there is no accountability demanded by other governments and Israel continues to enjoy total impunity.

We call on national governments, civil society and international organizations to demand that Israeli authorities immediately release our boat so that we can deliver our much-needed medical supplies on Al Awda and the fishing boat itself to the rightful recipients in Gaza. Detailed specification of our exact cargo on board are available on request.

Israel’s capture of the lead boat in this Gaza-bound flotilla may seem like a predictable outcome to some, but that doesn’t make it any less violent nor any less illegal. Our second boat Freedom will follow Al Awda within a day or two, and the Freedom Flotilla will continue until the blockade ends and Palestinians of Gaza regain their full freedom of movement.

Details about detainees still in prison, including their last videos and personal statements, can be found on our website and Facebook pages. 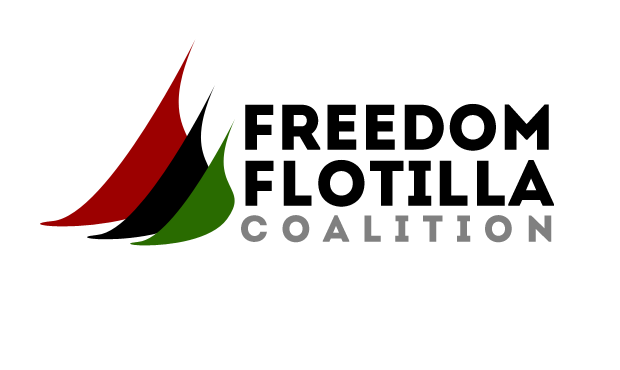 Re: Safe and unhindered passage for the 2018 International Freedom Flotilla to Gaza

The 2018 international Freedom Flotilla departed Sicily earlier this week and is now heading across the Mediterranean Sea towards Gaza and is due to arrive within the next several days.

On board are two Canadian citizens: John Turnbull, and Larry Commodore of the Sto:lo Nation, Canada who have bravely joined a number of other prominent human rights advocates from around the world to challenge the illegal blockade of Gaza.

The flotilla also carries approximately 13,000 Euros worth of urgently needed medical supplies (including gauze) to be gifted to Gaza’s over-stretched health services. The boats will be gifted to Gaza’s fishers, who are in desperate need of support in order to feed their families.

Like our many previous missions, this flotilla poses no threat whatsoever to the Israeli Government. However, in light of Israel’s unlawful attacks on, and seizure of previous Gaza-bound civilian boats in international waters, we once again call on the Canadian Government to urgently demand the Israeli authorities end their inhumane and illegal blockade of the Palestinian people of Gaza and allow the 2018 Freedom Flotilla safe and unhindered passage to their destination – the port of Gaza.

We look forward to your prompt response.

Noam Chomsky on The Timeliness of the Flotilla. Excerpts from an interview, May 2018

Noam Chomsky on The Value of Non-Violent Direct Action. Excerpts from an interview, May 2018 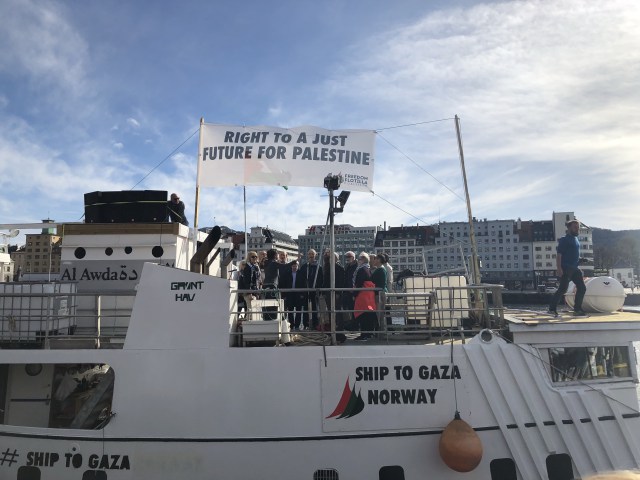 The motor vessel Al Awda (The Return), traveling in international waters towards Palestinian waters, 49 nautical miles from the port in Gaza City, has been contacted by the Israeli Occupation Forces navy and warned. The Israeli navy claims our ship is breaking international law and threatens that they will use “any measures necessary” to stop us. In fact, the only “necessary measures”  would be to end the blockade of Gaza and restore freedom of movement for all Palestinians. At last news from on board, Al Awda maintains her course towards Gaza, where the crew and participants hope to arrive this evening around 21:00 local time.

A number of warships have appeared, so an attack, boarding and capture appear to be imminent, and we anticipate that all communications with the vessel will be lost shortly. Al Awda is sailing under a Norwegian flag, carrying 22 people and a cargo of medical supplies, including #Gauze4Gaza. There are people from 16 nations on board, including human rights supporters, journalists and crew, along with €13,000 worth of medical supplies. The boat itself, a former fishing vessel from Norway, is a gift to Palestinian fishers in Gaza.

Four boats left Scandinavia in mid-May and have since stopped in 28 ports building support for a ‘Just Future for Palestine’, that demands Israel end its ongoing breaches of international law and the twelve-year blockade of Gaza, thereby enabling the only closed port in the Mediterranean to open and for people to have their right to freedom of movement. Al Awda is being followed by the Swedish-flagged yacht Freedom, which is also carrying medical supplies along with people from a number of nations. We anticipate that it will reach a similar area where the IOF attacked Al Awda within the next two days. Two smaller sailing boats that travelled from Scandinavia and sailed through the canal system in Netherlands, Belgium and France visiting inland ports, participated in the mission until Palermo.

“The Freedom Flotilla Coalition calls on the Norwegian Government, the national governments of those aboard Al Awda and the Freedom, other national governments, and relevant international organizations to act immediately.”  said Torstein Dahle of Ship to Gaza Norway, part of the Freedom Flotilla Coalition. “The international community must assume its responsibilities and demand that Israeli authorities ensure the safety of those on board, the speedy delivery of our gifts to the Palestinian people in Gaza, an end to the illegal blockade of Gaza,  and to stop impeding our legal right of innocent passage to Gaza to deliver our gift of much-needed medical supplies”.

More information about the ‘Right to a Just Future for Palestine’ flotilla and the FFC:
Web: https://jfp.freedomflotilla.org
Facebook: https://www.facebook.com/FreedomFlotillaCoalition
Twitter: @gazafflotilla

To arrange an interview or for more information, contact: jfp.freedomflotilla.org/media-room-2

Hanna Kawas, from Voice of Palestine, speaks at the fundraiser for 1st Nations activist, Larry Commodore

July 15, activist Larry Commodore, leaves Canada to join the flotilla. The 1st video is from his fundraiser dinner a few weeks in Vancouver.

This video was taken just prior to his departure.