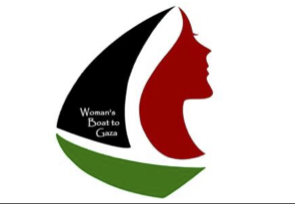 The Women's Boat to Gaza will set sail mid-September of this year and plans to dock at a number of Mediterranean ports along its route and arrive Gaza on October the 1st.

The FFC's fourth mission (FF4) will be sailed by an all women crew and will carry aboard, notable women from all over the world in order to highlight the undeniable contributions which have been made by Palestinian women to the resistance movement. Palestinian women have been central to the struggle in Gaza, the West Bank, inside the Green Line and in the diaspora.

"One of our goals is to highlight this struggle and the devastating effects it has had on women, often left alone, sifting through rubble to take care of their families when their husbands are imprisoned or murdered" said Wendy Goldsmith, of the Canadian Boat to Gaza campaign. "On International Women's Day, and on every day, we stand with these brave and resilient women, and will send the Women's Boat to Gaza to let them know they are not alone and to end the illegal blockade of Gaza."

WBG is endorsed by renowned women's organizations from all over the world, among them: The Women's Affairs Center (Gaza), The Coalition of Women for Peace (Israel), Forum de Politica Feminista (Spain), Women's Front (Norway), Coordinadora de Solidaridad Palestina (Mexico), CODEPINK Women for Peace (US) and the Fédération des femmes du Québec (Canada).

The FFC is also pleased to announce the launch of the WBG website.  Please visit:
www.womensboattogaza.org for more details and to follow the progress of WBG / FF4.

1) Is this flotilla initiative really calling for participation by women only?  And if so, why?

2) What is the importance of highlighting the struggle of women more specifically in Gaza, Palestine and globally in general?

3) Can men participate in the campaign and if so, in what capacity?

4) What is the Freedom Flotilla Coalition?  Which countries are participating?

5) Why is the WBG challenging the Israeli blockade by sea?

6) You say your campaign supports  the  full rights of the Palestinian people: can you explain what those are?

7) Why is the Israeli blockade of Gaza illegal?

8) Is the WBG a non-violent initiative?

9) How many ships will participate in the WBG and where will they depart from?

10) When will the Women’s Boat to Gaza sail?

12) Will you be bringing aid to Gaza?

13) What is the current situation on the ground in Gaza?

14) Are there any risks for those participating?

15) How will the Women’s Boat to Gaza be funded?

1) Is this flotilla initiative really calling for participation by women only?  And if so, why?

Yes.  This initiative is called the Women’s Boat to Gaza because everyone on board, including the crew, will be women. The Freedom Flotilla Coalition has decided to sponsor the Women’s Boat to Gaza because we believe that it is essential to highlight the vital role women play not only in the resistance movement but in the survival of the Palestinian people as a whole. We intend to raise awareness about the ongoing struggle that women in Gaza, in the West Bank, inside the green line and in the diaspora, have waged against the occupation historically, and which they continue to do.

Women fulfill diverse roles in direct actions such as the Women’s Boat to Gaza, and play an integral role in various efforts that are being undertaken both in Palestine and  to achieve justice and peace through non-violent means.

2) What is the importance of highlighting the struggle of women more specifically in Gaza, Palestine and globally in general?

Although numerous versions of feminism exist, we can all agree with Angela Davis’s point: "Feminism is the radical notion that women are people".

Like most people, we recognize the need to make our world more just and egalitarian. Women in Gaza often fill the role of caring for and sustaining life, and are actively involved in community development and nation building. It is important  to make their voices heard, even more so during periods of extreme injustice.

Women in Palestine participate in all social sectors and in all forms of resistance. They defend their rights and the rights of their children and communities, with courage and determination. Families encourage their children to attend school despite the Israeli checkpoints and ongoing harassment. During the olive harvest and popular demonstrations they challenge the soldiers and settlers. Despite its importance, their work in women's organizations remains nearly invisible. Women and men in Gaza endure the inhumane Israeli blockade and continue against all odds to raise their children and overcome barriers.

Women’s empowerment is linked to the general struggle of the Palestinian people against the occupation and in particular the dire need to lift the blockade. They are an inspiration and role models for all women and men who dream of a better world.

3) Can men participate in the campaign and if so, in what capacity?

Yes, men and women from campaigns around the world are organizing this project.  The names of our partners can be found on our website at www.freedomflotilla.org. Within this struggle, men and women play equal roles. In this particular project, it has been decided that women will take on the major role of confronting the Israeli Occupation Force (IOF). This does not minimize in any way the role that men take in both the organizing and planning stages.

4) What is the Freedom Flotilla Coalition?  Which countries are participating?

The Freedom Flotilla Coalition is composed of civil society organizations and initiatives from many countries.  We have been challenging the illegal and inhumane Israeli blockade of Gaza for many years and are committed to continue the struggle until the blockade is unconditionally lifted and the Palestinian people everywhere regain their full rights.

Watch this space as more campaigns join us.

5) Why is the WBG challenging the Israeli blockade by sea?

6) You say your campaign supports  the  full rights of the Palestinian people: can you explain what those are?

While our focus is on opposing the blockade against Gaza, we see this in the larger context of supporting the right to freedom of movement for all Palestinians everywhere. The Occupation daily violates the rights of Palestinians to move freely around their country and to leave and return to their country, as guaranteed by the Universal Declaration of Human Rights. We also support other broad-based demands for Palestinian rights based on international law, including:

1. Ending the Israeli occupation and colonization of all Arab lands and dismantling the Wall

2. Recognizing the fundamental rights of the Arab-Palestinian citizens of Israel to full equality; and

3. Respecting, protecting and promoting the rights of Palestinian refugees to return to their homes and properties as stipulated in UN resolution 194.

For information about the devastating effects of the blockade please visit http://www.euromedmonitor.org/en/article/1100/10-Years-of-Blockade:-The-Humanitarian-Impact

7) Why is the Israeli blockade of Gaza illegal?

Israel has occupied the Gaza Strip since 1967 and, as the occupying force, it is responsible for the well-being of the population within this territory. By applying restrictive measures that affect the population as a whole, it violates the Geneva Conventions and humanitarian international law, which prohibit collective punishment.

Experts warn that if the siege of Gaza continues, normal life will not be viable in the territory by 2020. The current blockade has been imposed for ten years by Israel and Egypt with support from many international governments. The blockade has imposed restrictions of movement on people and goods for more than a decade.  For the most part, the mainstream media does not cover this truth. Palestinians continue to attempt to raise awareness and demand action through world forums, but their collective voices are often silenced.

8) Is the WBG a non-violent initiative?

Yes.  Every initiative the Freedom Flotilla Coalition participates in is rooted both theoretically and practically within the framework of non-violence.  We elect to always counter oppression by nonviolent strategies.  Our goal is to peacefully end the illegal Israeli blockade.

9) How many ships will participate in the WBG and where will they depart from?

This has not yet been determined, but our ships will reach ports in the Mediterranean en route to Gaza in order to raise awareness about the terrible effects of the illegal Israeli blockade of Gaza. Stay tuned for a stop near you!

10) When will the Women’s Boat to Gaza sail?

The date of sailing has not yet been determined.  However, our goal is to sail in late 2016.

12) Will you be bringing aid to Gaza?

The Women’s Boat to Gaza  is not an aid mission; however we will bring as much aid as we can on our ships.  The need for reconstruction especially after the latest Israeli attack in 2014 is great, and  has not been met by the donor states.  The needs of the Palestinians living in Gaza are great and can not be satisfied by our efforts.  Nearly two million people are held hostage in the world’s largest open-air prison, and our demand is to put an end to this situation by upholding international law and respecting human rights. As always, we strive to bring a message of solidarity and hope while putting pressure on governments to intervene in this humanitarian crisis.

13) What is the current situation on the ground in Gaza?

The situation Gaza is always changing. Israel began to impose a series of political and economic sanctions on Gaza following the Palestinian elections in 2006. These sanctions became harsher as of 2007. Gaza was blockaded from the air, land and sea, and free movement of people and goods was restricted. In its many brutal attacks,  Israel has ravaged agricultural fields, schools, workplaces, hospitals, water supplies, electricity and homes in the city and throughout the Gaza Strip, depriving Palestinians in Gaza of resources they need to live. The IOF have even made swimming  in the Mediterranean unhealthy because the Israeli bombs have destroyed the Gaza sewage system. 1.9 million Palestinians struggle for life in Gaza. Seventy-two percent of Palestinians living in Gaza, 65 percent of whom are children, suffer food insecurity. Ten percent of the children have poor physical health. The United Nations terms this situation as “intolerable.”

14) Are there any risks for those participating?

Whenever the illegal actions of the Israeli Forces are challenged, risks will be inherent.  People living in Gaza live with the risk every day.  In 2010, the Israeli Occupation Forces  killed nine unarmed civilians on the Mavi Marmara and a tenth later died of his injuries. We will have no weapons and our boats will be inspected prior to sailing. However, the IOF has a record of treating passengers on boats headed for Gaza with violent force. FFC participants accept these risks.  Previous missions all ended with the boats being captured and the people on board imprisoned. Internationals have been deported and banned from future entry into Israel. Recently FF3 participants have been denied entry, even though they were not on a boat that came into contact with the IOF.

15) How will the Women’s Boat to Gaza be funded?

All of the participating campaigns will raise funds in their own countries and communities by connecting with individuals and organizations who support our effort. FFC is not affiliated with any political organization. We are a network of grassroots civil society individuals and groups. Any donation is welcome, no matter how small. We see our action as representing all those who refuse to remain silent.

There are many ways to become involved. Help could take the form of sharing information with your contacts, organizing local fundraising events, joining work teams or making a donation through any of the campaigns participating in the project. Please follow us on the web, Facebook or Twitter. If you are willing to support the campaign and its political demands, please contact the campaign closest to you.