Hanna Kawas, from Voice of Palestine, speaks at the fundraiser for 1st Nations activist, Larry Commodore

July 15, activist Larry Commodore, leaves Canada to join the flotilla. The 1st video is from his fundraiser dinner a few weeks in Vancouver.

This video was taken just prior to his departure. 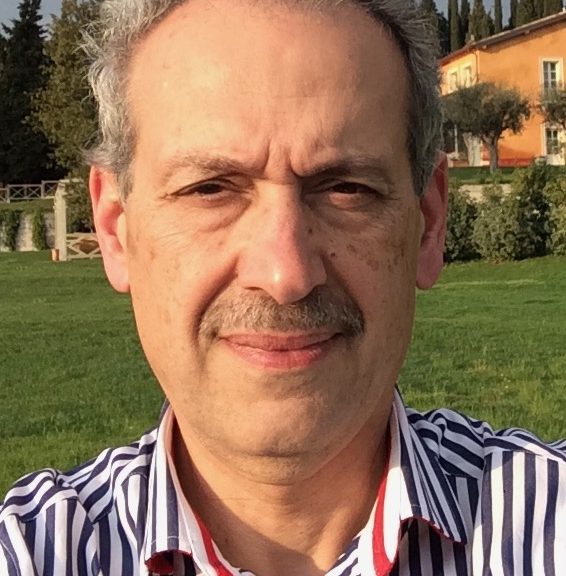 Dr. Majed Khraishi has lived in Newfoundland for 30 years, but still has family in Jordan and the West Bank.(NLMA/Facebook)

The family connections of a St. John's doctor — and a desire to inspire change  — have motivated him to join a team sailing to the Gaza Strip.

"The most important thing is really to raise awareness of the horrible situation and the siege of Gaza, this has been going on for many years," says Dr. Majed Khraishi, a rheumatologist and a clinical professor in the medical school at Memorial University of Newfoundland.

"There are two million people who are living in a space not much larger than the size of greater St. John's in some unbelievable conditions," Khraishi said.

He has been living in Newfoundland for 30 years, but still has family in Jordan and the West Bank.

A Newfoundland doctor is part of a team sailing to the Gaza Strip. Dr. Majed Khraishi drops by the studio to talk about his personal connection to Palestine… and the dangers that come with the journey. 7:59

Khraishi, who is Palestinian, will serve as an onboard doctor with the Freedom Flotilla Coaltion (FFC), an international organization that aims to challenge the Isreali blockade of Gaza.

He said he has two reasons for joining the fleet of boats.

"Bring some supplies, some humanitarian supplies. But more importantly to raise awareness of our governments — of people around the world — that there is something inhumane going on here," he said.

Israel and Egypt argue that they must maintain the blockade of Gaza to contain Hamas and other militant groups, which have built up arsenals over the years, including short-range rockets.

Hardships linked to the blockade, including daily power cuts and rising poverty, have driven turnout at protests.

Khraishi says for him, it's a humanitarian issue first, not a political one.

"The fact that people everywhere have the right to live in dignity and … without fear of being shot, or not even having their children taken care of," he said. 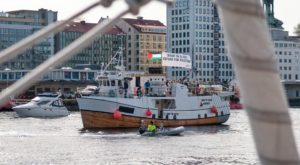 Al Awda (The Return) in Bergen, Norway. This is the boat Khraishi will travel on, serving as the onboard doctor.

The FFC fleet of four boats will stop in ports throughout Europe, running public outreach and awareness campaigns.

Khraishi is meeting the group in Lisbon Wednesday, and will sail for about a week on one of the boats, although he expects to disembark before the final leg as the group tries to reach Gaza in mid-July.

"What I really feel is some sense of fulfilment, some sense of apprehension and sometimes [I wonder] is that all that we can do?"

"I did a very small part eventually that will help others to do bigger parts and eventually maybe there is a light at the end of the tunnel." 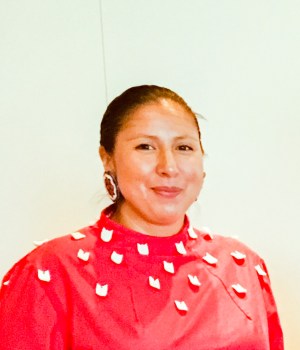 The Freedom Flotilla boat Al Awda (The Return) spent two days in Copenhagen (Denmark) last weekend, and on Tuesday-Wednesday traveled to Kiel in Germany, where she was greeted by Reiner Braun, co-president of the International Peace Bureau, among other well-wishers.

The first Canadian Boat to Gaza participant, Heather Milton-Lightening from Treaty 4 Territory (Saskatchewan) is currently on board Al Awda (The Return) — you can read more about her here: https://jfp.freedomflotilla.org/news/heather-milton-lightening. Before leaving Copenhagen, Heather and Israeli participant Yudit Ilany did a great interview with Dimitri Lascaris on The Real News Network, listen and watch here: https://therealnews.com/stories/freedom-flotilla-sets-sail-for-gaza-after-the-great-march-of-return

Along with three other Freedom Flotilla boats (Freedom, Mairead and Falestine), Al Awda left Kiel (Germany) this morning and is heading for Wilhemshafen, where they should arrive Saturday pm: https://jfp.freedomflotilla.org/news/freedom-flotilla-to-gaza-in-wilhelmshafen-germany-may-26-28. Together they will continue their 75 day voyage to Gaza, to challenge and break the illegal Israeli blockade.

Our Canadian Boat to Gaza campaign is committed to paying our share of the international Freedom Flotilla budget this year is $30 000, including the costs of acquiring this hard-working former fishing boat. Donors like you have helped us raise amounts much larger than that in the past. Will you help us fund our contribution now? You can donate by e-transfer (Interac, from Canada accounts only), mailing cheques or money orders, or online, see : https://canadaboatgaza.org/donate/

Israel has maintained an illegal, inhumane and destructive blockade on Gaza for over a decade. The United Nations now says that Gaza will become uninhabitable by the year 2020 because of the Israeli blockade. In response to the brutal Israeli blockade, for seven years the Freedom Flotilla Coalition has carried out non-violent direct actions aimed at raising international awareness and putting pressure on the international community to end the blockade.

We sail this year for the right to a just future for Palestine. Children and minors, who make up more than half of the Gaza population of over 2 million, are victims of the ongoing blockade, which has robbed them of their childhood; their rights to safety, education, and health; and their prospects for a decent future. We will continue to put pressure on our governments and protest their complicity with Israel's crimes against humanity.  We sail again to stand with the Palestinians of Gaza, as they demand their freedom of movement and their right to a just future in their land. But we can only do it with your generous support. Our campaign needs your support in our to pay our share of the boat that the Freedom Flotilla is sailing against the blockade of Gaza and for a the Right to a Just Future for Palestine. Make out cheques or money orders to Turtle Island Humanitarian Aid and send them to:

(Note: like many of our sister organizations, we would prefer to move away from dependence on PayPal for online donations. At this point, we are pleased to accept e-Interac transfers from Canadian bank accounts, and we hope to announce other electronic payment methods soon. Please e-mail us if you have questions about this). Some (especially those who can benefit from a charitable tax receipt in the US) may wish to donate through the US Boat to Gaza page:

https://2018boatstogaza-nonviolenceinternational.nationbuilder.com/contribute In other parts of the world, please consider donating through one our other partner campaigns in the Freedom Flotilla:  https://jfp.freedomflotilla.org/donate

Whether you can donate financially or not, please help us spread the word about our campaign:

Gail Miller, an activist on the flotilla from Barcelona to Gaza these days, in an interview to Israel Social TV on the reasons for her support in the flotilla. The flotilla, which began with a happening event to raise awareness to the siege on Gaza is a feminine initiative and is composed entirely of women from various countries around the world who have chosen to raise awareness of the issue through the flotilla.

Read the rabble.ca interview, "The people of Palestine are not forgotten" here