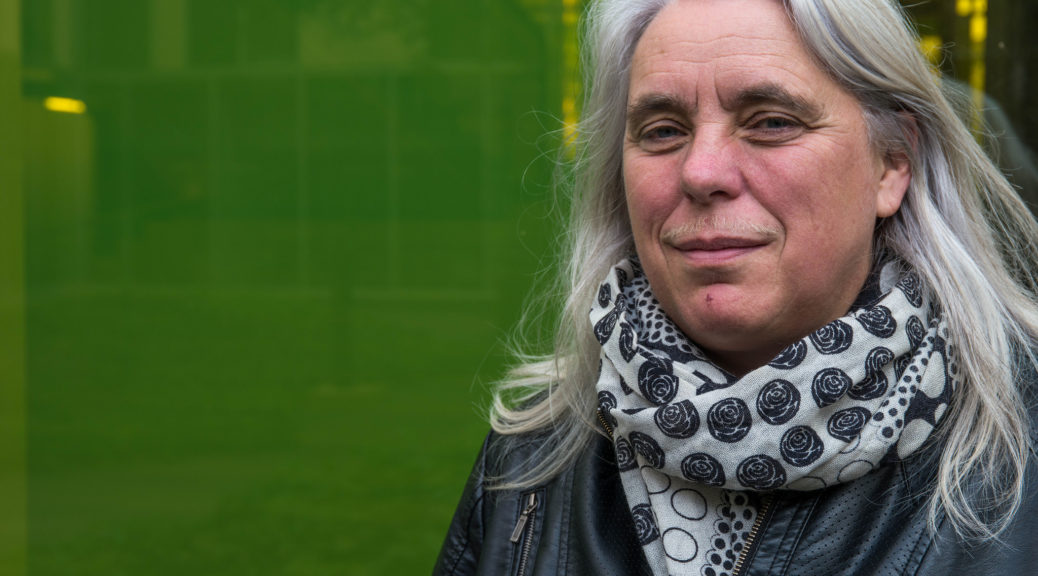 "I am happy to see that the Freedom Flotilla for Gaza is sailing again, especially at this difficult time for our Palestinian sisters and brothers.
In 2011, I myself participated in the Canadian Boat to Gaza, in order to support the struggles of the Palestinian people. Seven years later, it is still necessary to act in solidarity with the people in Gaza in order to have their rights respected and to lift the inhuman blockade imposed by Israel!
Palestinians demand freedom of movement and the right to live in dignity on their lands. The Freedom Flotilla is a powerful, peaceful demonstration of our solidarity with the Palestinian people of Gaza! "

The Canadian Boat to Gaza campaign needs your support in order to pay our share of the boat that the Freedom Flotilla is preparing to sail, starting in May 2018, against the blockade of Gaza and for a Just Future for Palestine.

You can donate online (canadaboatgaza.org/donate) or by postal mail. Make out cheque or money order to Turtle Island Humanitarian Aid and mail it to:
Canadian Boat to Gaza
PO Box 1950, London Stn. B
London, Ontario N6A 5J4
CANADA

(Note: like many of our sister organizations, we would prefer to move away from dependence on PayPal for online donations. At this point, we are pleased to accept e-Interac transfers from Canadian bank accounts, and we hope to announce other electronic payment methods soon. Please e-mail us if you have questions about this).
Some (especially those who can benefit from a charitable tax receipt in the US) may wish to donate through the US Boat to Gaza page: https://2018boatstogaza-nonviolenceinternational.nationbuilder.com/contribute
In other parts of the world, please consider donating through one our other partner campaigns in the Freedom Flotilla:  https://sgf.freedomflotilla.org/donate

Whether your can donate financially or not, please help us spread the word about our campaign: 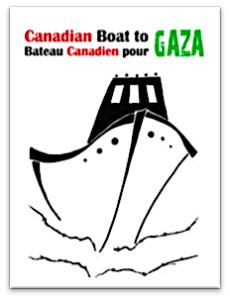 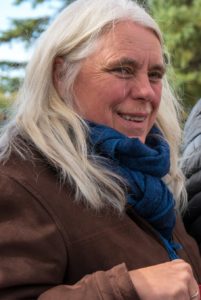 from We Are Not Numbers by Mohammed Moussa 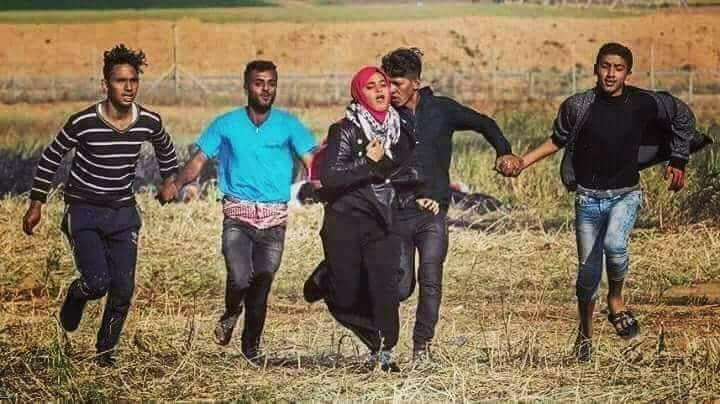 Four of us
were trapped
in southern Gaza
on the made-up border
surrounded  by  100 snipers’  bullets
like birds about to be snared
with gas bombs falling from the sky
like the rains of January.

Hope lunged out of the smoky darkness
with her kufiyah wrapped around her neck;
like a deer
she ran,
holding our flag
below the kites flying,
she came running and shouting,
“I’m coming for you, for the land!”
Then handed us the flag
to put it on the fence to prove
this land is ours and
we’re returning.

We ran back with her
the four of us
holding each other’s hands;
like a chain of protection,
we formed a human shield
to protect her,
our hope, but
the sky was our shield
protecting us all
from the rain of bullets
at our backs.

We ran from our grief to come,
inhaling the gas and
the sound of bullets
sinking into other bodies
falling.

She didn’t.
We surrounded
our hope,
kept her running. 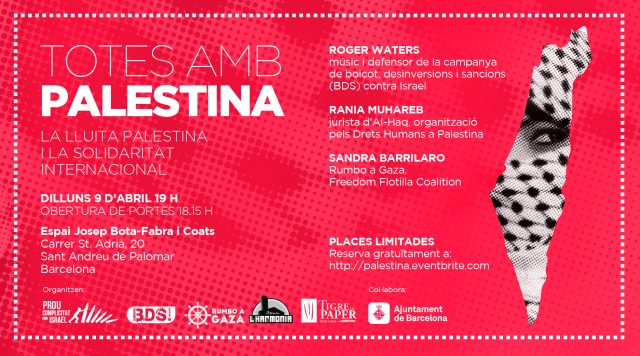 Opening his European tour in Barcelona, Roger Waters will participate in the event ‘Totes amb Palestina’ (Everyone with Palestina), which will take place at the Espai Josep Bota de la Fabra i Coats, Monday 9th April. 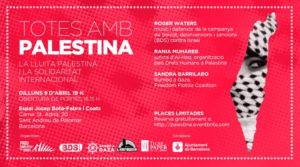 Rania Muhareb, legal researcher with the Palestinian organization Al-Haq, will take part in the event and tell about the consequences of the latest escalation of repression in Palestine. Sandra Barrilaro, Rumbo a Gaza, Freedom Flotilla Coalition, will present Right to a Just Future for Palestine.

The Gaza Strip, Palestine, is recovering from the bloodiest episode since 2014, after the Israeli forces killed 21 people during the March 30th demonstrations near the border with Israel. Many thousands of Gaza’s residents have gathered to demand the right of the Palestinian refugees and their descendants to go back to their historical homes as part of The Great March of Return. The date to start this pacific action, supported by all Palestinian factions, was chosen as a reminder that the loss of land is a constant under the illegal Israeli occupation.

In light of this and while Roger Waters is in Barcelona, for the opening of his Us +Them tour; April 13th& 14th at the Palau Sant Jordi, various groups have organized this event ‘Totes amb Palestina’, to be held Monday April 9th in the Espai Josep Bota, at the Fabra i Coats cultural space of Sant Andreu de Palomar, Barcelona.

The founder member of Pink Floyd, a firm defender of the Boycott, Divestment and Sanctions campaign (BDS) against Israel’s violations of human rights, will share the stage with Rania Muhareb, a legal researcher with Al Haq, a Palestinian human rights organization, who will speak about the increase in repression experienced by the Palestinian population at the moment; and with Sandra Barrilaro, member of Rumbo a Gaza (Freedom Flotilla Coalition), who will present Right to a Just Future for Palestine, the new mission to challenge the illegal blockade imposed on the Gaza Strip for more than a decade.

Free access subject to on-line booking using this link: http://Palestin.eventbrite.es. The event is organized by the following group: BDS, Prou Complicitat amb Israel, Rumbo a Gaza (Freedom Flotilla Coalition), Ateneu l’Harmonia, Tigre de paper edicions; and supported by the municipality of Barcelona. For more information: info@rumboagaza.org. We hope to share with you video from this event in the future, as was done with a Waters event in Vancouver last year (https://vimeo.com/243417578).

Freedom Flotilla Coaltion literary contest results.
After reviewing 29 English entries, our jurors selected a winner and a runner up in the categories of short story and poetry.   The winners are, for short story:  Mikayla Boorany (South Africa), Dan Lieberman (USA), and for poetry: Gerry Sloan (USA) and Anna Dora Antonsdottir (Iceland). Their submissions have begun appearing on our website www.sgf.freedomflotilla.org, and will continue to be published, along with winning texts in Spanish and Arabic. See our full announcement for more, including a link a collection of submissions from school-children in South Africa: sgf.freedomflotilla.org/news/winners-of-the-literary-contest-keys-to-the-future-of-palestine.

Our literary contest results announcement coincided with the Palestinian Land Day protests and Great March of Return, marking 70 years of the Nakba (Catastrophe). See the Freedom Flotilla Coalition's statement about the killing of civilian protestors: Massacre at Gaza’s Borders: We Will Not Be Silent – End Israeli Impunity. We will be continuing to follow these protests supporting the Palestinian Right of Return over the coming weeks. Our next flotilla, sailing for a Just Future for Palestine, will leave mid-May from Copenhagen and will make many port stops along the way before departing for Gaza mid-July from the western Mediterranean.  Please help spread the word by sharing our messages, and please follow our mission as we make our way towards ending the illegal blockade of Gaza, .

The Canadian Boat to Gaza, part of the Freedom Flotilla Coalition