Originally published in the Lower Island NEWS at 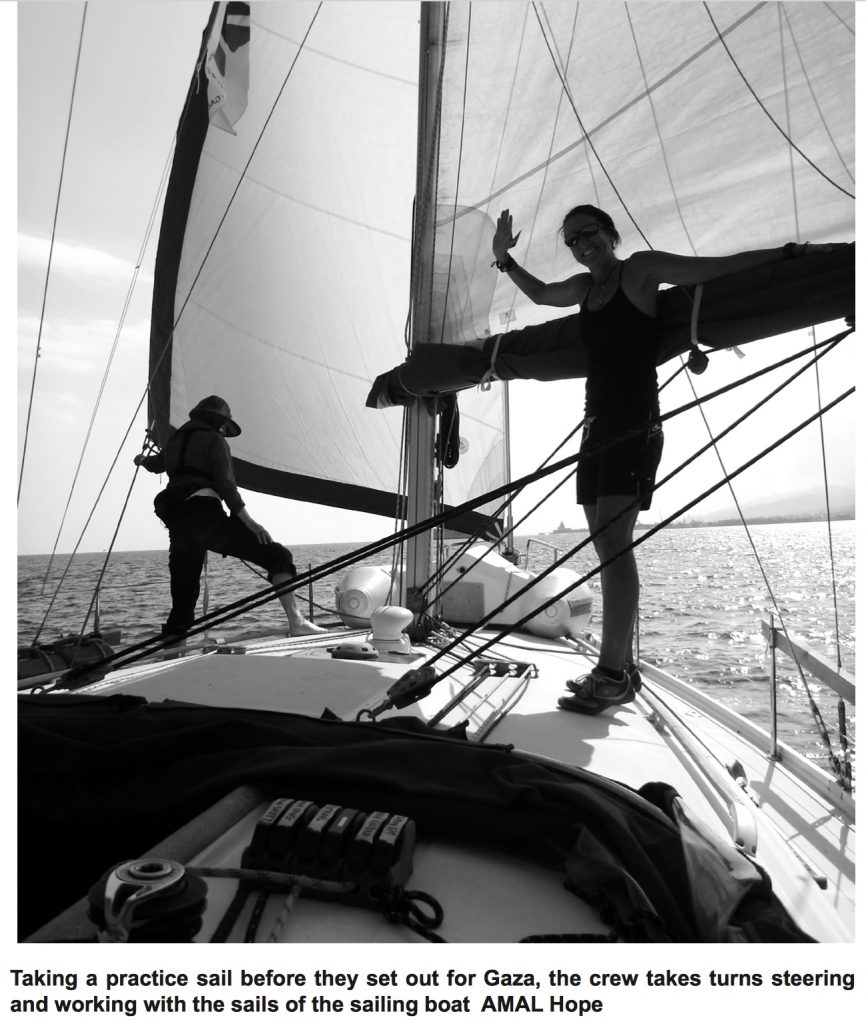 The Women’s Boat to Gaza had three objectives:

1. To bring HOPE to the people of Gaza, to let them know that there are people in the world who care, that they are not forgot- ten and to support their incredible spirit of resilience.

3. To focus the eyes of the world on the desperate situation of the people of Gaza.

According to a UN study, Gaza will be uninhabitable by 2020. For many it is al- ready uninhabitable. Large numbers of people are dependent on humanitarian aid for survival and many children su er from malnutrition

– There is a limited supply of medicines and little or no access to specialized medi- cal care.

– Fishers are regularly attacked by the Israeli military.

– Crops are destroyed at the time of har- vest.

– More and more farmland is taken for the Israeli determined “bu er zone”.

– Water is not t for human consump- tion.

– Only 5% of water is safe to drink; chil- dren are getting kidney disease and colon cancer.

– Raw sewage ows into the sea and, during winter storms, it ows in some streets. The water table is being contami- nated with raw sewage.

Jaldia Abubakra (from Gaza but living in Spain for 30 years) and Maite Mompo, seasoned Rainbow Warrior sailor and writer

– Electricity is available only sporadi- cally.

– Gaza is essentially a large open air prison where people are trapped, with no escape and no place to hide.

None of the above are natural develop- ments; Gaza is deliberately being “de-de- veloped” and destroyed in the false name of “security”.

Why should we care? Why, in a world with so many human rights issues, do we focus on Palestinians in Gaza? We might be better to ask, “Why do our government and our tax dollars support this inhumane situation?”

According to Je Halper, founder of the: Israeli Committee Against House Demoli- tions (ICAHD), the Palestinians of Gaza, and of the Occupied/Colonized Territories, are used as human test subjects (guinea pigs) for the latest in military technology, equipment and techniques of subjugation and control. This important information is detailed in Je Halper’s book War Against the People: Israel, the Palestinians and Global Paci cation

Was the Women’s Boat to Gaza a suc- cess? YES; the idea of women’s boats challenging the Israeli blockade had great popular appeal.

Although the AMAL 11 was unable to sail due to technical di culties (much to our disappointment!) and the ZATOUNA, with 13 women from 13 countries, was hijacked by the Israeli Navy in International waters before reaching the shores of Gaza, the campaign had amazing media coverage which helped break the media silence sur- rounding the Israeli blockade.

In fact, the Women’s Boat to Gaza re- ceived international media attention – ex- cept in the US and Canada. Newfoundland was the exception with good CBC and newspaper coverage. Perhaps they were able to identify with the people of Gaza. .

Our work will continue until the bloade is broken; soon we will be planning the next campaign and we will be in touch when plans begin to take shape.

Details of the sailing and more me- dia articles can be seen here: http://can- adaboatgaza.org/2016.10/19/international- media-coverage/

So what more can we do?
We can join others from around the world to work for justice using Boycott, Di- vestment and Sanctions/BDS to put eco- nomic pressure on Israel to end the Occu- pation which is a Colonial Settler project.

The following words spoken by Chris Hedges in a Rally in New York in August 2014 speak for me and many others:

“Peace in the Promised Land will come when we force, through boycotts, di- vestments and sanctions, the powerful to end the blockade of Gaza and to deny the instruments of death to Israel. But it is up to us.

“We are all that stands between the Palestinians and obliteration….

“The road to justice will be long and hard. But there is no turning back, for we are no longer driven by a vision of su ering but possessed by it. We hear the cries from Gaza. We carry these cries within us….