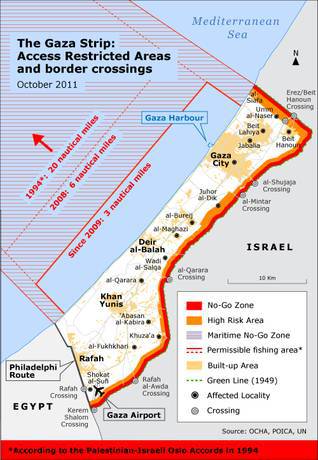 According to the United Nations Office for the Coordination of Humanitarian Affairs (OCHA), between 1 January and 15 May 2017, the Israeli Occupation Force (IOF) opened fire on Gaza fishers 133 times. On 15 May, the IOF Navy shot at two fishing boats about three nautical miles from the Gaza shore, northwest of Gaza City, killing a 25 year old fisherman, Mohammed Majed Bakr, whose wife is now a widow with two small children, aged one and three. In violation of International Law, Israel has declared that Gaza fishers can only fish in a zone close to the Gaza shore. When the massive attack on the population of Gaza ended in 2014, Israel promised to increase the size of zone where Palestinians could fish. Once the international media attention had faded, Israel went back on its word. Even within that area the IOF navy routinely terrorises Palestinian fishers, destroying or stealing fishing boats, destroying their nets and confiscating their catch.

These small Palestinian fishing boats are no threat to Israel’s security, but they could impede Israeli efforts to pillage Palestinian gas fields near traditional fishing areas that are approximately seven to ten nautical miles off shore. The Israeli destruction of the Palestinian fishery and theft of undersea resources is one of the many disastrous effects of the on-going Israeli occupation of Gaza, about which international media are largely silent.

The Israeli occupation of Gaza, the West Bank, East Jerusalem and Golan Heights has lasted 50 years. The intensified Israeli blockade of Gaza has lasted for 10 years. These ‘anniversaries’ are an indictment on governments and international authorities that do not put any effective pressure on Israel to end the occupation and the oppression of the Palestinian people. When governments fail, people around the world must take action.

The Freedom Flotilla Coalition (FFC), composed of campaigns from around the world, will continually focus its work on actively challenging the illegal blockade and occupation of Gaza, and on demanding that governments worldwide take action. Palestinian civil society has repeatedly called upon the international community to take steps that will result in Israel’s isolation until it shows respect for international law and human rights. In response, the FFC supports various forms of non-violent struggle adopted by the Palestinian people against oppression and injustice.

Along with organizations representing Palestinian fishers in Gaza, we have started the ‘Solidarity with Gaza Fishers’ campaign. We call on you to join us in casting spotlights on Israeli terror against the fishers of Gaza, in order to pressure the Israeli government to end it and on our respective governments to cease supporting it. 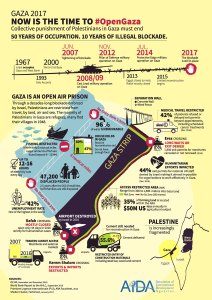