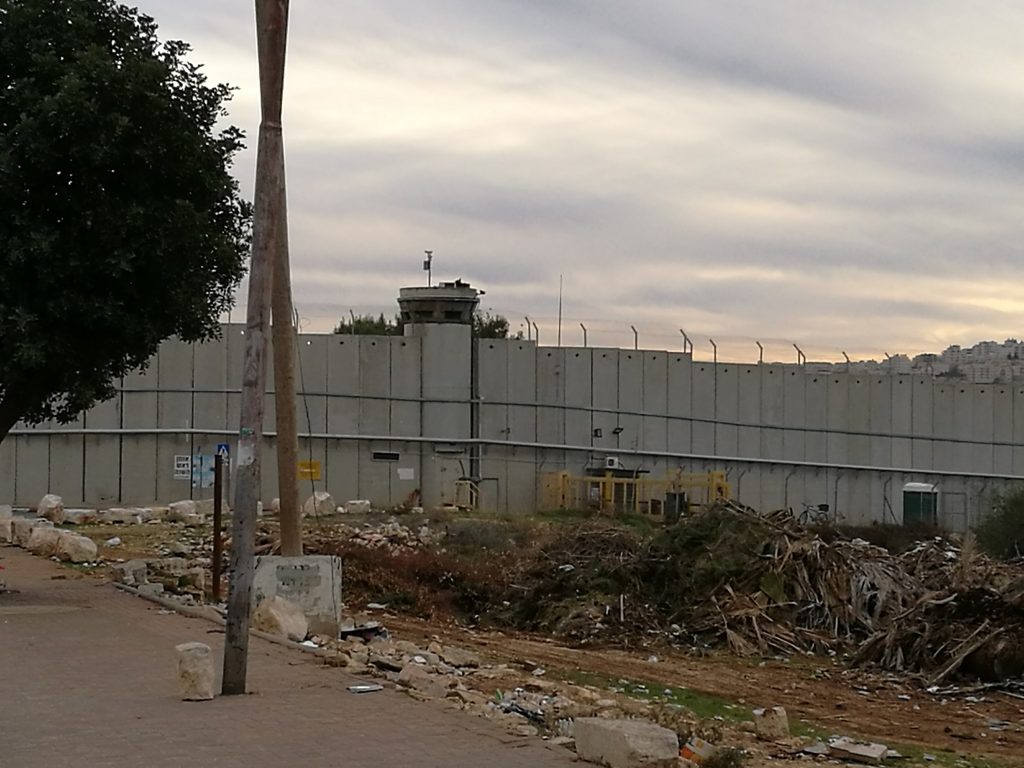 This story was initially published in theovercast.ca

Marilyn Porter is on the steering committee of the Canadian Boat to Gaza.

Sociology Professor Emerita Marilyn Porter recently returned from a trip to Israel, where she was the sole Canadian on a team of 45 people experiencing, firsthand, how the Israeli government is harassing and displacing Palestinian farmers.

The farmers live in an area that is supposedly under Palestinian control, yet they’re constantly subject to harassment and displacement by Israeli forces. They’re even required to have permits to move from one village to another, drive on certain roads, farm, etc.

The Israeli Wall has made matters worse. The Wall is over 700 kilometres long, and it isolates thousands of Palestinians, making it difficult for them to engage economically and socially with their community.

As Marilyn explains, “The Wall dominates the Palestinian landscape, splitting many communities in two. In their day-to-day lives Palestinians are forced to travel many extra miles to farm their land or visit their relatives.”

Porter and her team were there to help families plant olive tree saplings.  Olive trees are vital to Palestinian farmers, but these farmers are regularly confronted by the Israeli army, who threaten to (or do) confiscate property. It’s something Porter witnessed firsthand.

She says that Palestinian farmers whose land is close to the Wall, or close to illegal Israeli settlements suffer the most. According to the UN, 80% have seen a decrease in their yields since 2015.

In the Bethlehem area alone in 2014 (latest UN figures), “85% of the land had been taken over by the Israeli government for settlement expansion ‘nature reserves’ or military zones, and 70 Palestinian residential areas have outstanding eviction orders.”

She has witnessed the grim struggle of Palestinian farmers herself. Israeli settlers uprooted her efforts right before her eyes, destroying the hundreds of olive trees her team planted, a mere day after they were set in soil.

“The day before the Israeli settlers uprooted our trees,” she says, “they had stood around in threatening ways, and then summoned the Israeli security forces to drive us off the farmer’s land.” They were heavily armed.

Later that night, they uprooted and destroyed hundreds of olive trees. “We were advised by the local NGO we were working with that there was no recourse and, indeed, that it might be hazardous for our farmer to even report the attack.”

The UN documents attacks by settlers on Palestinians, and their land. It is on record that more than half of Palestinians (54%) have suffered physical attacks or attacks on their property last year.

“Fully armed soldiers — many of them very young — are everywhere and can, and do, demand to see papers and permits at any point. This happened one day when we were working. Our farmer had all the permits necessary, including for us to be helping him, but we were still driven off by a group of armed soldiers and had to stop our work.”

Porter has been committed for years to the plight of Palestinians “in their struggle to establish an economically and socially stable state, free of harassment and control.”

Porter was in Israel as part of the The Joint Advocacy Initiative’s  Keep Hope Alive olive planting initiative. You can catch her speaking about her experience tonight at 7 pm, at Memorial University (Room A-1043). The talk is titled, “The Olive Tree Campaign: How Palestinians Resist the Israeli Wall.”